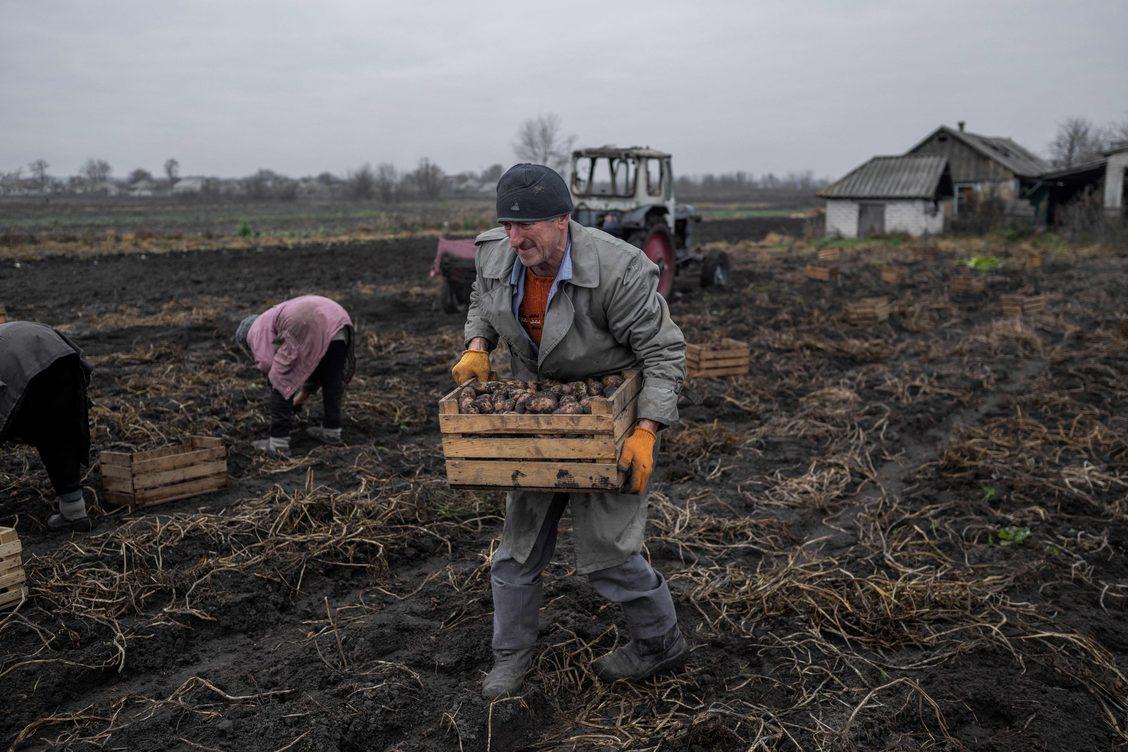 Local residents harvest last potatoes in a field at the eastern Ukrainian village of Zarichne, near the frontline in Donbas region, on November 10, 2022, amid the Russian invasion of Ukraine. In Zarichne village, which is taken back from the Russian forces few weeks ago, people live without electricity, water and basic needs. (Photo by BULENT KILIC/AFP via Getty Images)

Zaluzhnyi: Ukraine liberates 41 settlements in Kherson Oblast since Oct. 1. Ukraine has advanced about 36.5 kilometers into the Russian defense in the Kherson direction, liberating over 41 settlements since Oct. 1, according to Valerii Zaluzhnyi, commander-in-chief of the Armed Forces. Moscow’s announced retreat from Kherson is the result of Ukrainian forces’ actions as they destroyed Russia’s logistics routes and its support system, Zaluzhnyi said.

Ukraine liberates Snihurivka in Mykolaiv Oblast. Ukrainian soldiers published a video from Snihurivka on Nov. 10, saying that the settlement had been liberated by the forces of the 131st reconnaissance battalion, according to Ukrainska Pravda. Ukraine’s Armed Forces reportedly entered the town of Snihurivka, located on the way to Kherson, on Nov. 9, when Russia announced its retreat from the west bank of the Dnipro River.

UK intelligence: Russia’s withdrawal from Kherson to take several days. Russian forces have restricted crossing points on the Dnipro River, which makes them vulnerable when retreating from Kherson. The withdrawal will likely happen over several days covered by defensive positions and artillery, the U.K. Defense Ministry reported. “The loss of Kherson’s west bank will likely prevent Russia from achieving its strategic aspiration of a land bridge reaching Odesa,” reads the report.

Zelensky: ‘It’s not the enemy leaving. It’s Ukrainians who drive the occupiers out at high cost.’ “We should all remember now and always what this movement means, we should remember that every step (forward has a cost), the lives of our warriors,” President Volodymyr Zelensky said.

ISW: Ukraine holds initiative, in process of securing major victory in Kherson. The major Ukrainian victory underway in Kherson Oblast will not be Ukraine’s last, the Institute for the Study of War said in its latest assessment. The experts predict that fighting will continue on the southern axis, including in Donetsk Oblast’s Bakhmut, the only place Russian forces are still attempting meaningful offensives, and in northern Luhansk Oblast as Ukrainian forces continue counteroffensive operations.

Media: Russian troops reportedly blow up TV center, destroy infrastructure in Kherson. The Russian forces also reportedly blew up a regional energy facility, a local publication Most reported on Nov. 10. According to the report, there are problems with mobile service in the city, it only works near the Antonivsky bridge.

Zelensky: If Russia blows up Kakhovka dam, it will be war declaration to whole world. Any attempt by Russian forces to blow up the Kakhovka Hydroelectric Power Plant, flooding Ukrainian territory and dewatering the Zaporizhzhia Nuclear Power Plant would mean that Russia is “declaring war on the whole world,” said President Volodymyr Zelensky. “Think what will happen to you then,” he said, addressing Russia’s leadership.

General Staff: Russian forces strengthening their positions on Dnipro’s east bank. Ukraine has advanced about 36.5 kilometers into Russian-occupied Kherson Oblast, liberating over 40 settlements since Oct. 1, according to Valerii Zaluzhnyi, commander-in-chief of the Armed Forces.

Bloomberg: Russia is covertly checking its bomb shelters. Russian state workers are quietly checking basements and other shelters not used since Soviet times, people familiar with the efforts told Bloomberg. Inspections and cleanups of civil-defense facilities, which were typically built in the basements of hospitals, apartment buildings, schools and government offices in the Soviet era, are taking place in cities across the country, sources told the journalists.

Annual inflation in Ukraine reaches 26.6% in October. The inflation increased by 2.5% compared to the previous month, according to a report by the State Statistics Service of Ukraine. In 2023, inflation will decrease to 20.8%, according to the National Bank’s estimates. 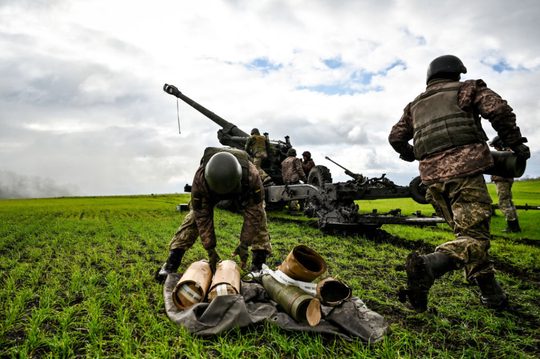 How Russia’s humiliating defeat in Kherson came to be.

The Russian defeat in Kherson Oblast was almost inevitable — but it happened sooner than many expected. 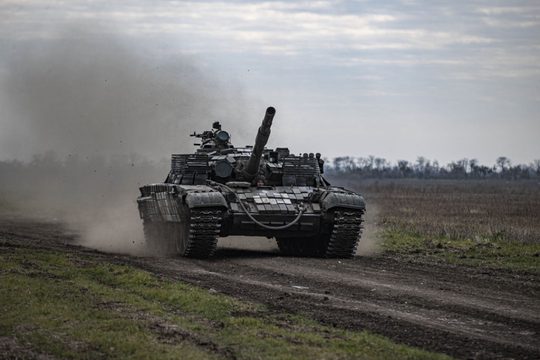 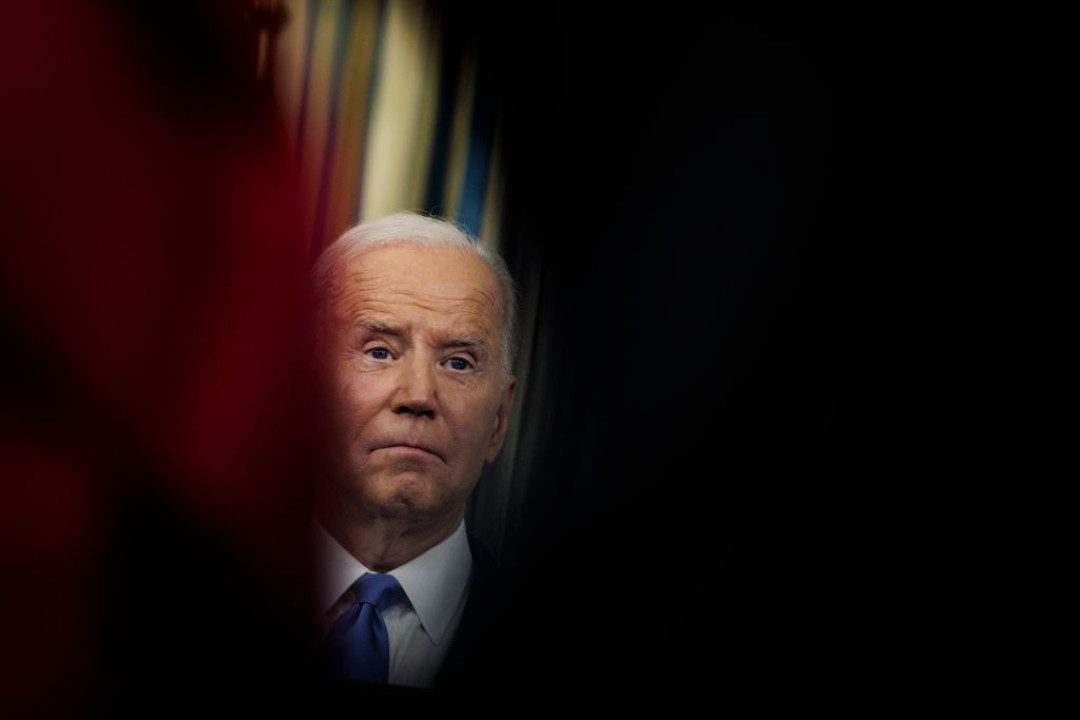 US election unlikely to jeopardize aid to Ukraine, for now.

If Moscow was hoping the U.S. midterm elections would sway military aid to Ukraine, it’s likely to be disappointed. Helping Ukraine fight off Russia continues to have support from both main parties in Washington, analysts said.

2 killed, 2 wounded in Russian strike on Mykolaiv. Mykolaiv Oblast Governor Vitalii Kim reported that Russian forces launched a missile strike on Mykolaiv on Nov. 11, destroying a five-story residential building. At least two people were killed and two more wounded, according to Kim. Search and rescue operations are ongoing. President Volodymyr Zelensky said it was “the terrorist state’s cynical response to our successes at the front.”

Russia’s attacks kill 3, injure 12 in Donetsk Oblast. In the past 24 hours, Russian forces have killed three civilians and wounded 12 in Donetsk Oblast, not including Mariupol and Volnovakha, according to the oblast governor, Pavlo Kyrylenko. The bodies of five more people killed by Russian troops during the occupation have been discovered in the village of Yarova, according to Kyrylenko.

WSJ: South Korea to sell Ukraine-bound munitions to US. The U.S. will purchase artillery shells from South Korea that are destined for Ukrainian Armed Forces, U.S. officials familiar with the deal told the Wall Street Journal. South Korea will sell 100,000 rounds of 155mm artillery ammunition that will be delivered to Ukraine, “enough to supply Ukraine’s artillery units for at least several weeks of intensive combat.”

Minister: Poland hands over 1,570 Starlink systems to Ukraine. Digital Transformation Minister Mykhailo Fedorov said on Nov. 10 that the systems have already been delivered to Ukraine. “This is especially important now because we have problems with electricity due to Russian shelling,” he said.

UK freezes $20.5 billion worth of Russian assets. Britain has frozen assets owned by Russian oligarchs, other individuals and entities sanctioned for Moscow’s full-scale invasion of Ukraine that together account for $20.5 billion, the U.K. government wrote on Nov. 10. Russia has become Britain’s most-sanctioned nation, leaving behind Libya and Iran, according to the Office of Financial Sanctions Implementation.