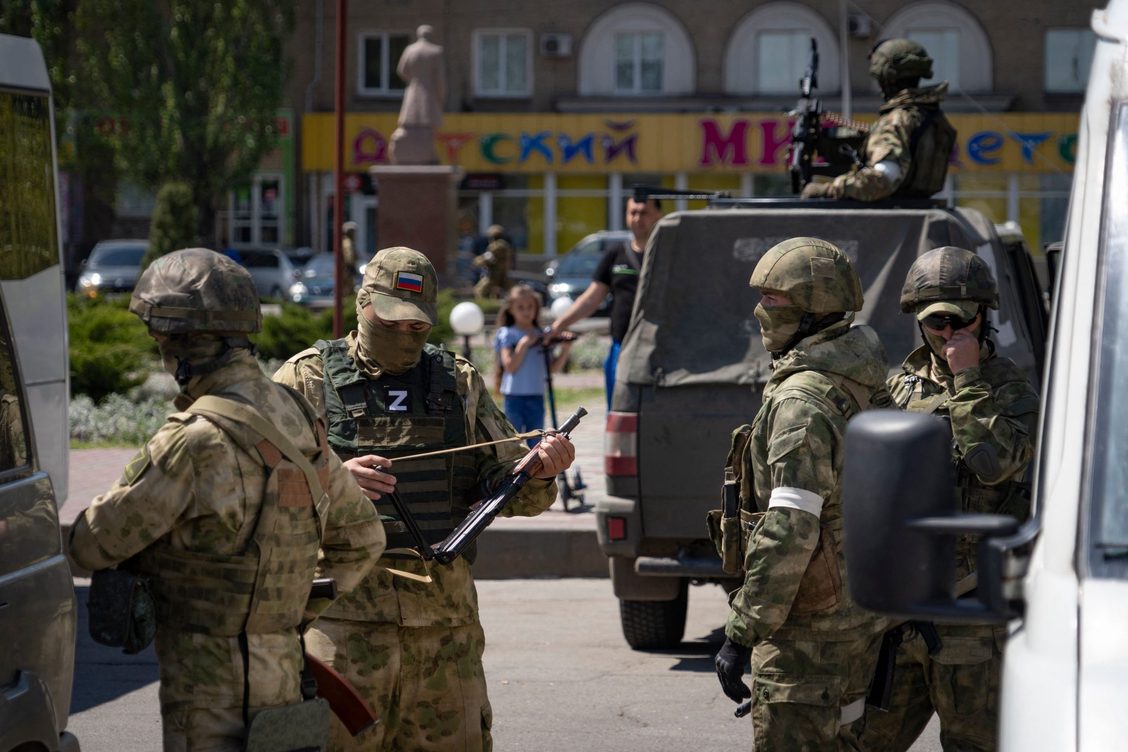 Russian soldiers patrol a street in occupied Melitopol on May 1, 2022. (Getty Images)

Ukraine’s Military: Russian frigate Admiral Makarov leaves Sevastopol. Ukraine’s Operational Command “South” said on May 22 that the warship made its way to Russian positions in the Black Sea, increasing the probability of missile strikes on Ukraine.

Explosion in Enerhodar injures self-proclaimed ‘mayor’ and his bodyguards. Self-proclaimed mayor of temporarily occupied Enerhodar, Andrii Shevchyk, and his bodyguards were injured in a blast at the entrance of his apartment building early on May 22. Enerhodar Mayor Dmytro Orlov confirmed the accident and said they are being treated at a local hospital. “We can conclude that the collaborator was the target,” said Orlov.

Mariupol on verge of outbreak of infectious diseases. Mayor Vadym Boychenko said that in addition to the humanitarian catastrophe created by Russia’s forces, the city faces an outbreak of contagious diseases. “The sewers don’t work. There are chaotic mass burials all over the city. During the summer rains, all these (toxins) will get into the rivers, sea and the springs where people get their water,” he said.

Russian military vehicles put on display in central Kyiv. A Russian T-72 tank, a BMD-4 infantry fighting vehicle, part of a Tigr military vehicle, and an electronic warfare vehicle are exhibited on the Mykhailivska Square in Kyiv.

The Guardian: Syrian barrel bomb experts in Russia to work with Putin’s forces. European officials reportedly believe that over 50 experts linked to the Syrian military’s notorious barrel bombs are in Russia to potentially develop a similar campaign against Ukraine. Barrel bombs are crude explosives packed into a drum, often dropped from a helicopter.

White House: Russia will be unable to disrupt US military assistance to Ukraine. U.S. National Security Advisor Jake Sullivan said in a press briefing on May 22 that the supply chain of weapons into Ukraine is “diverse and resilient.” According to Sullivan, even if Russia targets some shipments of Western weapons in Ukraine, it will not fundamentally disrupt provisions.

Ukraine’s parliament bans Russian war symbols. On May 22, the Verkhovna Rada banned the symbols “Z” and “V,” which have been used by Russia to promote its war. However, President Volodymyr Zelensky has called for them to be permitted for educational or historical purposes.

Bloomberg: Russia’s Aeroflot to face shortage of aircraft parts. The Russian flagship carrier, which is currently under international sanctions, will be forced to scrap some of its aircraft within the next three months to provide spare parts for its fleet. Before Russia’s war, the carrier operated flights to 56 countries, compared to 13 countries by mid-May.

Ukraine bans medications produced in Russia, Belarus. The Ukrainian parliament approved changes to the country’s law on medicines on May 22, “restricting the flow” of those medications that have been at least partially produced by the enterprises located in Russia or Belarus.

Ukrainian air defense shoots down Russian missile in Kyiv Oblast. According to Kyiv Oblast Military Administration, the missile was shot down in the Fastivskyi District on May 22. No casualties have been reported yet.

Nine injured in Russia’s shelling of Mykolaiv during past 24 hours. As of May 22, 151 people injured by Russia’s attacks are hospitalized in Mykolaiv, the city’s council reported. Russian military shells Mykolaiv using with cluster munition. Mayor Oleksandr Senkevych asked residents to stay away from windows.

Unlike Ukraine’s manufacturing plants, warehouses and stores, many of which lie in ruins, its IT sector has had much better luck. In the first quarter of 2022, the industry’s export revenue hit a record $2 billion despite martial law and mobilization, up 25% year-over-year, according to Danylo Hetmantsev, the head of the parliament’s finance and taxation committee. Read our story on Ukraine’s resilient tech industry here.

The Kyiv Independent talked to a number of Ukrainians fleeing Russian occupation. Read their stories here.

Prosecutor General’s Office: Russian forces use hostages as human shields in Chernihiv Oblast. From March 3 to 31, 350 residents were kept in a 197-square-meter school basement in Yahidne, where Russian troops had set up headquarters. Among the hostages were elderly people, as well as 77 children and five infants. Due to a lack of sufficient space, sanitation, fresh air, food, and water, 10 elderly people died.

One killed, four injured in Russian airstrike on Malyn, Zhytomyr Oblast. Malyn Mayor Oleksandr Sytailo reported late on May 22 that one Ukrzaliznytsia railway employee was killed. Three other railway employees and one citizen were wounded in the attack. Sytailo added that the attack damaged local railway infrastructure, around 150 residential buildings, several shops and cafes, and industrial factories in the area.

Russian forces kill five, wound 11 in Donetsk Oblast on May 22. Donetsk Oblast Governor Pavlo Kyrylenko said that, of those killed, two were in Lyman, one in Dachny, one in Klinov, and one in Avdiivka.

Rescuers recover over 150 bodies from beneath rubble in Kharkiv since start of war. According to Deputy Head of the State Emergency Service Anatolii Torianyk in a televised address on May 22, 250 people have been rescued and 98 damaged areas unblocked.

Zelensky: Ukraine may be losing up to 100 soldiers fighting in the east every day. President Volodymyr Zelensky said during a press briefing on May 22 that 50-100 soldiers may be dying every day defending Ukraine in “the most difficult direction,” in the country’s eastern regions. Ukraine doesn’t publish its military casualties. As of April 16, Zelensky said that 2,500-3,000 Ukrainian troops had been killed, and up to 10,000 had been injured.

Josep Borrell: ‘The time to push forward European defense is now.’ Depleted stockpiles resulting from EU military support to Ukraine since the start of Russia’s war point to shortfalls in European security and underinvestment in the EU’s defense industry for a number of years, the EU’s top diplomat Josep Borrell wrote in a blog post on May 22. Russia’s assault on Ukraine “represents a tectonic shift of the European security landscape,” Borrell said.

Duda: EU must ‘open its doors’ to Ukraine as a candidate in June. Polish President Andrzej Duda said that Kyiv is waiting for a signal from the EU leadership that the bloc is open to welcoming Ukraine. A decision on Ukraine’s EU candidate status is expected to be raised during the European Council meeting in late June.

French Minister: Ukraine should not have illusions about quick EU membership. French Minister for European Affairs Clement Beaune told Radio J that it would take Ukraine at least 15 to 20 years to achieve this goal. He called it a lie that Ukraine could join the bloc within six months or even a couple of years. “I don’t want to offer Ukrainians any illusions or lies,” said Beaune.