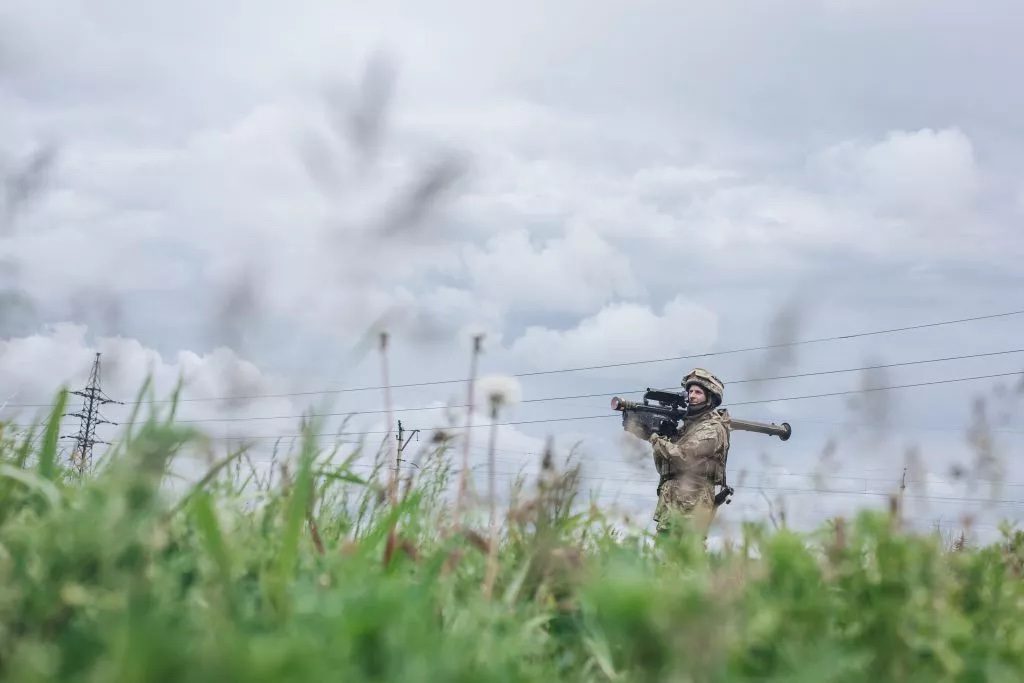 A Ukrainian soldier is seen with an anti-aircraft weapon in Donetsk Oblast, Ukraine on May 14, 2022. (Photo by Diego Herrera Carcedo/Anadolu Agency via Getty Images)

Dear readers, we are launching a new newsletter, Belarus Weekly, and you are the first to see it! To receive the Belarus Weekly newsletter in the future, subscribe via this link.

Institute for the Study of War: Russia likely struggle to take ground in Sievierodonetsk. According to the U.S. think tank, Russian troops have performed poorly in operations in built-up urban terrain throughout the war and are unlikely to be able to advance rapidly in Sievierodonetsk itself. Russian forces continue to make steady and incremental gains around the city, the experts say, but have not yet encircled the Ukrainian defenders. Sievierodonetsk in Luhansk Oblast has become the main focal point in the battle for the Donbas, with Russian troops attempting to encircle Ukrainian forces based in the city.

Governor: Fighting continues around Sievierodonetsk. Luhansk Oblast Governor Serhiy Haidai reports that the city is not cut off and there are still Ukrainian troops fighting in the outskirts. “We will have enough forces and means to defend ourselves,” he said, adding that Russia will not be able to take the city in the next few days as analysts predicted. However, there is a possibility that “in order not to be surrounded, (the Ukrainian forces) will have to retreat.”

Pentagon: Russia advances in Donbas due to narrow field of operation. Pentagon spokesman John Kirby explained Russia’s achievements in Donbas due to targeting smaller areas without cutting logistic lines. Kirby added that the U.S. is “mindful and aware” of Ukraine’s request for multiple-launch rocket systems but that “decisions haven’t been made yet.” (See the article linked from the “International Response” section of this newsletter for a breaking update on this story)

Russian regional lawmakers call for withdrawal of troops from Ukraine. Four Communist members of the legislature of Primorye Krai in Russia’s Far East have called on dictator Vladimir Putin to end the war in Ukraine. Leonid Vasyukevich, one of the members, said at a meeting of the legislature that Russian troops are suffering heavy losses and failing to achieve military success. He added that “young people who could be of great benefit to our country are dying and becoming disabled.” The appeal was condemned by the Communist Party’s leadership in Primorye Krai.

New report suggests Russia intents to ‘destroy Ukrainian people.’ A group of scholars and genocide experts say there are reasonable grounds to conclude that Russia bears state responsibility for direct incitement to commit genocide against Ukrainians. A report, signed by 30 experts, shows that high-level Russian officials and state media “repeatedly and publicly deny the existence of a distinct Ukrainian identity,” implying that those who self-identify as Ukrainian threaten the unity of Russia or are Nazis. The report adds that mass killings, deliberate attacks on evacuation routes, and the indiscriminate bombardment of residential areas by Russian forces established a “genocidal pattern” and shows that the Russian state is breaching the UN Genocide Convention.

Ukraine’s Moscow-led orthodox church publicly disagrees with Patriarch Kirill over Russia’s war. The “Ukrainian Orthodox Church of the Moscow Patriarchate” had issued an official statement saying that the church “condemns the war” and “disagrees with the position of Patriarch Kirill of Moscow on the war in Ukraine.” The church said it would act independently from Moscow yet didn’t officially declare its autocephaly (autonomy). The Moscow-led church also denied rapprochement with the independent Orthodox Church of Ukraine.

Zelensky: ‘Donbas will be Ukrainian.’ In a video address, President Volodymyr Zelensky said that Russia should not think that it will be holding the cities of Lyman or Sievierodonetsk as they will eventually return to Ukraine. Donetsk Oblast Governor Pavlo Kyrylenko said earlier that Lyman in Donetsk Oblast is mostly under Russian control. “That’s why we have to increase our defense, increase our resistance, and Donbas will be Ukrainian again. Even if Russia will bring all suffering and ruination to Donbas, we will rebuild every town, every community. There’s no real alternative,” Zelensky added.

Kuleba: More US weapons arriving in Ukraine. Foreign Minister Dmytro Kuleba said heavy weapons were on the “top of the agenda” of discussions between the U.S. and Ukraine after a phone conversation with U.S. Secretary of State Antony Blinken.

Russian troops shell Sumy Oblast with mortars. Ukraine’s Operational Command North said that seven explosions had been caused by Russian 120 mm mortars fired towards the town of Seredyna-Buda early in the morning. Another eight rounds were fired about an hour later towards the same settlement. The military reported no casualties.

Meduza: Kremlin still discussing attacking Kyiv. Russian media Meduza quoted undisclosed sources saying the Kremlin is discussing a possible assault on Kyiv and even hopes for a full-scale victory by fall. The Russian leadership is hoping Europe will get tired of helping Ukraine and that bloc members will have to agree with Russia on gas and oil before the heating season, according to Meduza’s sources.

The largest and bloodiest battle in Europe since World War II is, in many ways, a duel between Russian and Ukrainian artillery. Russia has a clear numerical advantage in this fight, gradually securing its gains by eliminating the Ukrainian lines that stand in its way. Read our story on how Ukrainian airborne is fighting Russia in Donbas woods here.

Intimate partner violence is the most common form of violence against women in both conflict and non-conflict settings, according to the World Bank. The Kyiv Independent talked to domestic violence victims as they struggle to get help amid war. Read our story here.

UN: 8,766 civilian casualties in Ukraine since Feb. 24. According to the UN’s human rights agency, as of May 27, Russia’s war against Ukraine has killed at least 4,031 civilians and wounded at least 4,735 since Feb. 24. The agency believes the actual figures are considerably higher. Ukrainian officials said up to 22,000 were killed in Mariupol alone.

At least 10 killed, 35 injured in Russian missile attack in Dnipropetrovsk Oblast. Hennadiy Korban, head of the Territorial Defense Force center in Dnipro, said on May 27 that Russia fired three missiles at Dnipropetrovsk Oblast. One of them, an Iskander ballistic missile, hit the barracks of the National Guard. Korban said that earlier the Defense Ministry had ordered that no more than 20 service people can be stationed in one place.

New York Times: US will send long-range mobile rocket launchers to Ukraine. The Biden administration has reportedly approved sending long-range multiple launch rocket systems to Ukraine, according to U.S. officials who spoke on condition of anonymity as they are not authorized to talk publicly on security matters. The weapons in the transfer, which will likely be announced next week, will include mobile rocket launchers capable of hitting much more distant targets than the launchers Ukraine’s military is using now.

Lithuania fundraises 3.3 million euros to buy Bayraktar drones for Ukraine within two days. The fundraising attracted money at a rate of about 1,500 euros per minute, according to Lithuanian TV presenter Andrius Tapina. Former Lithuanian President Dalia Grybauskaite also joined the fundraising initiative to raise 5 million euros to buy drones for Ukraine initiated on May 25.

Former Constitutional Court head declared wanted after allegedly illegally leaving Ukraine. The Prosecutor’s General Office on May 27 reported that Oleksandr Tupytsky, ex-chairman of the Constitutional Court, suspected of crimes against justice, was declared internationally wanted. According to the prosecutors, Tupytsky illegally crossed the Ukrainian border on March 17 and is currently in Austria. Under martial law, Ukrainian men aged 18-60 are banned from leaving the country. Tupytsky is 59. He led the court’s effort to disrupt anti-corruption infrastructure in 2020.

Iran to supply Russia with car parts and gas turbines in exchange for steel. Iranian Industry, Mining, and Trade Minister Reza Fatemi Amin said on May 26 that Iran would use barter trade with Russia to ensure supplies of raw materials for its metals and mining sector. He also said that Iran would need to import zinc, lead and alumina from Russia. Russia has had difficulty maintaining equipment and components because Western imports have dropped as a result of sanctions.