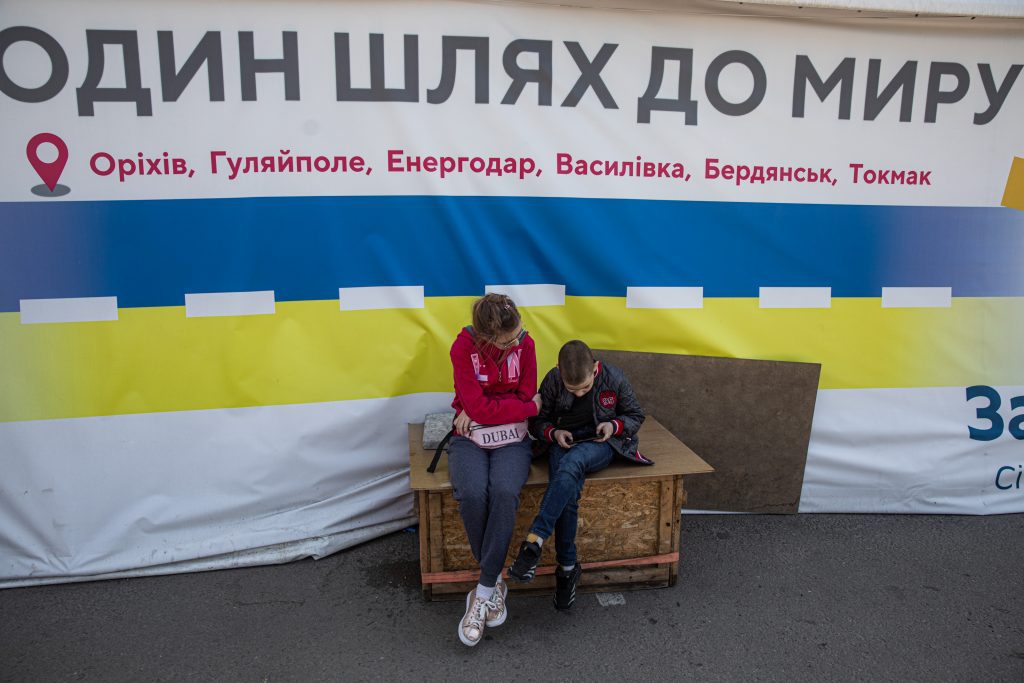 Children sit on a plywood boxat an evacuation center in Zaporizhzhia after fleeing Russia’s war on May 4, 2022. (Kostyantyn Chernichkin/The Kyiv Independent)

Zelensky: The world has to pressure Russia into exchanging Ukrainian POWs. President Volodymyr Zelensky said during a speech in Davos that several thousand Ukrainians are in Russian captivity, and they need to be exchanged. He said that foreign leaders “are trying to talk to Russia,” but the world has to pressure it politically instead, including with an oil embargo. He also stressed that the coming weeks will be difficult as fighting in the Donbas is intensifying and Russia is attempting to hold on to the occupied areas. Since the start of the war, Russia has launched 2,275 missiles and conducted over 3,000 airstrikes, he said.

Ukrainian forces liberate 24 settlements in Kharkiv Oblast during major counter-offensive. Commander-in-Chief Valerii Zaluzhnyi said on May 23 that in villages north of Kharkiv, residents were forced to spend months in basements during the Russian occupation.

Russian shelling leave Donetsk, Luhansk oblasts without gas. Ukraine’s Gas Transmission System Operator reported on May 23 that Russian shelling has damaged the main gas pipeline transporting gas to settlements in Donetsk and Luhansk oblasts. Providing gas is currently impossible due to active hostilities, and there are no alternatives to deliver gas to the oblasts, the statement reads.

Yermak: Russia deported 232,000 children from Ukraine since Feb. 24. Andriy Yermak, head of President Volodymyr Zelensky’s office, said, citing Russian sources, that Moscow forcibly deported 232,000 Ukrainian children to its territory since the start of the full-scale invasion. Over 2,000 exiled children are either orphaned or separated from their parents, he added.

Russian troops demand bribes from citizens evacuating Melitopol. According to Zaporizhzhia’s Regional Military Administration on May 23, Russian troops have been requesting Hr 3,000 to 5,000 ($100-$170) from residents wanting to leave the city.

Russian troops bombard Dnipropetrovsk Oblast with rockets. Mykola Lukashuk, head of the regional council, said one rocket hit Pavlohrad, and another three hit the Synelnykyivsk district. No casualties were reported.

Institute for the Study of War: Russian forces have little success in Sievierodonetsk, unlikely to take Bakhmut. According to the U.S. think tank on May 23, Russian forces have intensified their offensive on the cities of Lyman and Avdiivka, Donetsk Oblast, with some success.

Ukraine to import salt as massive factory in Donbas shuts down due to war. Artemsil, one of the biggest salt enterprises in the world, stopped operations in April due to heavy fighting in Donbas. Acting Chief of Artemsil Viktor Yurin told Vilne Radio that the shelling partially destroyed the company’s headquarters, while most of the employees evacuated from Soledar, Donetsk Oblast. Artemsil extracts over 70% of the country’s salt.

Joint Forces Operation: Russian troops shell 38 communities in Donetsk, Luhansk oblasts. On May 23, seven civilians were killed and six injured as a result of Russian shelling. Attacks on civilian infrastructure damaged 63 buildings, including 53 homes, a kindergarten, a bank, and a pharmacy.

Kuleba: 580 international companies still operating in Russia. Foreign Affairs Minister Dmytro Kuleba said that, while 1,439 companies have left Russia, it is “business as usual” for those that have remained.

Ukraine’s Air Force: Russia sustains heavy aerial, ground losses on May 23. Over the past 24 hours, six Russian drones and one cruise missile were reportedly downed and 30 Russian infantry fighting vehicles were destroyed.

A Kyiv court sentenced Russian soldier Vadim Shishimarin, 21, to life in prison for killing a civilian in Sumy Oblast during the Russian troops’ retreat on Feb. 28. Shishimarin is the first Russian soldier convicted of a war crime in Ukraine. Read our story on his trial here.

Days after Russia launched its full-scale war against Ukraine, reports of the invading troops lacking decent provisions surfaced on the internet. The Kyiv Independent’s defense reporter Illia Ponomarenko and investigative reporter Igor Kossov compare Russian and Ukrainian MREs, debunking some of the earlier misconceptions about Russia’s readiness for war. Watch the video here.

Russian media claim Azovstal POWs to be tried by tribunal in Mariupol. Russian news agency Interfax reported citing anonymous sources that the Ukrainian defenders taken prisoner from the Azovstal steel mill will be tried by a tribunal in occupied Mariupol. The trial may be held in several stages and in several other locations, the agency reported.

Russia killed at least 4,600 civilians in Ukraine since Feb. 24. The casualties include 232 children. The figure does not take into account data from Russian-occupied territories, according to Prosecutor General Iryna Venediktova.

Zelensky: 87 people killed by Russian airstrike in Chernihiv Oblast on May 17. The bodies were found under the rubble at the Ukrainian army’s Desna training ground.

Russian forces kill 3, wound 6 in Donetsk Oblast on May 23. According to Governor Pavlo Kyrylenko, Russian troops had killed civilians in the villages of Soledar, Adamivka, and Zoria, Donetsk Oblast.

UK: Russia’s death toll during 3 months in Ukraine same as during 9-year Afghanistan war. The combination of poor low-level tactics, limited air cover, a lack of flexibility and a command approach that reinforces failure led to Russia’s increasing losses in Ukraine, the U.K. Defense Ministry said.

Austin: 20 countries offer new security assistance packages for Ukraine. According to U.S. Defense Secretary Lloyd Austin, 20 countries “announced new security assistance packages” after the meeting of the Ukraine Contact Group, including “donating critically needed artillery ammunition, coastal defense systems, and tanks and other armored vehicles.” Other countries made new commitments to training the Ukrainian military and sustaining its military systems, Austin added. A total of 47 countries participated in the virtual meeting. The next meeting will be held on June 15.

Lithuania aims naval coalition to lift Russian blockade of Ukrainian ports, UK supports. Lithuanian Foreign Minister Gabrielius Landsbergis proposed a plan for a maritime coalition “of the willing” to lift the Russian blockade of the Black Sea on Ukrainian grain exports during talks with the U.K. Foreign Secretary, the Guardian reported. “We must show vulnerable countries we are prepared to take the steps needed to feed the world,” he said. Russia has so far ignored pleas to end the Black Sea blockade preventing Ukraine from shipping most of its grain to international markets.

Bild: German government has been blocking delivery of up to 100 Marder IFVs to Ukraine for weeks. The German media also reported that contrary to Berlin’s claim that its military doesn’t have any infantry fighting vehicle (IFV) available to help Ukraine, Bild said, citing a source, that the German Defense Ministry has 32 Marder tanks that are “no longer used” and could have been repaired within six weeks.

Starbucks to quit Russia after nearly 15 years. The Seattle-based coffee chain has 130 stores with almost 2,000 employees throughout Russia, operated by its licensee Alshaya Group. Starbucks had paused operations in Russia in early March, and is now leaving for good.

Poland terminates gas contract with Russia ahead of schedule. The contract, signed in 1993, was valid until the end of 2022, but Poland decided to terminate it earlier due to Russia’s war against Ukraine, reaffirming “the Polish government’s determination to become completely independent of Russian gas,” Polish Climate and Environment Minister Anna Moskwa said on May 23. “We have always known that (Russian gas giant) Gazprom is not a reliable partner,” she said.

Three Ukrainians included in TIME’s 100 most influential people in the world. The U.S. magazine has chosen President Volodymyr Zelensky and Commander-in-Chief Valerii Zaluzhnyi for the “Leaders” category, while Ukrainian media Ukrainska Pravda’s Chief Editor Sevgil Musaieva is in the “Innovators” category. Russian dictator Vladimir Putin and Chief Editor of Russian publication Novaya Gazeta Dmitry Muratov, who opposes the war in Ukraine, have also been included.

Report: Secondary real estate market in Kyiv collapses by 52%. In comparison to October 2021, the number of apartments purchased in the Ukrainian capital fell by more than half in May 2022, according to real estate search engine Flatfy’s press release. In southern and eastern Ukraine, the demand fell by 90-100%.