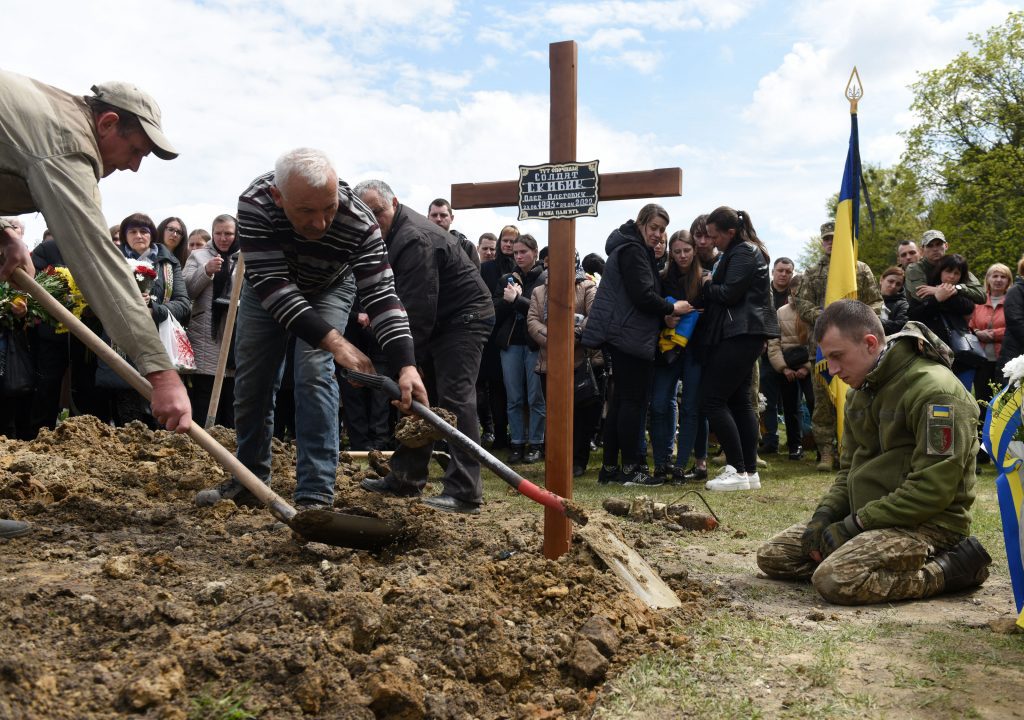 Relatives and friends attend the funeral of Ukrainian serviceman Oleh Skybyk at the Lychakiv cemetery in Lviv on April 28, 2022. (Getty Images)

Poll: 82% of Ukrainians believe Ukraine shouldn’t give up territory for peace. According to a recent survey by the Kyiv International Sociology Insitute, only 10% of the polled Ukrainians say that Ukraine can give up some of its territories to achieve peace and preserve its independence.

Zelensky: ‘Russia will also have to leave Crimea.’ President Volodymyr Zelensky said during his daily address that Russia will have to leave Crimea, “as well as Kherson, Melitopol, Enerhodar, Mariupol, and all other cities and communities where they are still pretending to be the owners.” “They will definitely not be the owners there,” he said. During this daily address, the president also said that Russia has thrown “all the strength it has left” into attacking Donbas. Zelensky added that intercepted conversations of Russian troops make it clear “they are well-aware this war does not make sense, and that strategically their army has no chance.”

Russia claims Mariupol sea port is demined, ready for foreign ships to leave. On the morning of May 25, foreign flagged vessels will be able to leave the port in the Sea of Azov through the humanitarian corridor, 115 miles long and 2 miles wide, towards the Black Sea, the Russian Defense Ministry claimed.

Russian forces capture Svitlodarsk, Donetsk Oblast. According to Serhiy Hoshko, the head of the Svitlodarsk military administration, Russian occupiers entered the city on the morning of May 24 and hoisted a Russian flag on the city council building.

Official: Russian occupiers shell Sloviansk with cluster bombs. No casualties were reported because residents had already left the targeted buildings, according to Vadym Lyakh, the head of the Sloviansk military administration.

ISW: ‘Russian forces have likely abandoned efforts to encircle large Ukrainian formations in eastern Ukraine.’ The Institute for the Study of War said in its May 24 update that Russian troops “are instead attempting to secure smaller encirclements and focus on Sievierodonetsk.” This change in strategy is allowing for gradual advances, but at the expense of abandoning several intended lines of advance and deep encirclement of Ukrainian forces in eastern Ukraine. Ukrainian forces are also likely conducting a controlled withdrawal southwest of Popasna near Bakhmut to protect Ukrainian supply lines against Russian offensives in the southeast of Bakhmut in Donetsk Oblast, the ISW wrote.

Prosecutors identify eight Russians involved in war crimes in Ukraine. Prosecutor General Iryna Venediktova said that they had taken part in the murder of the mayor of Motyzhyn in Kyiv Oblast and the torture of Ukrainian civilians. These include Oleg Krikunov, Chingis Gonchikov, Alexander Vanchikov, Magomedmirza Suleymanov and Vitaly Dmitriev, who belong to Russia’s 37th motorized infantry brigade. Three other Russians involved in the crime are Sergei Sazanov, Sergey Sazonov and Alexander Stupnitsky from Wagner, a Russian military contractor, according to Venediktova.

UK Intelligence: Russia capturing Sievierodonetsk ‘pocket’ would result in whole of Luhansk Oblast under Russian occupation. According to the latest intelligence update by the U.K. Defense Ministry, Russia seeks to encircle Sievierodonetsk, Lysychansk, and Rubizhne towns in Luhansk Oblast, and has increased the intensity of its operations in the area. Although capturing Sievierodonetsk is now Russia’s main effort, this operation is just a part of Russia’s campaign to seize the Donbas, the ministry said.

FM Kuleba urges countries not to buy grain stolen from Ukraine by Russia. According to Foreign Minister Dmytro Kuleba, Russia is trying to sell the grain they steel in Ukraine by loading it onto ships and passing through Bosporus. “Don’t buy the stolen. Don’t become accomplices to Russian crimes,” Kuleba said.

Days into Russia’s all-out war, the regional capital of Mykolaiv became a bastion of Ukraine’s southern defenses. After Russia rapidly occupied Kherson in late February, Mykolaiv immediately became its next target. Their forces shelled, bombed and fired missiles at the regional capital, trying to encircle the city of half a million people. Read our field report from Mykolaiv here.

It has been three months since people across Ukraine woke up to explosions, signaling the start of Russia’s invasion of Ukraine. The war many observers alleged would last a few days has reached the ninety day mark. Check out three months of Russia’s war in photos here.

The New York Times editorial, “The War in Ukraine Is Getting Complicated, and America Isn’t Ready,” published on May 19, immediately caused an uproar in Ukraine. A veiled manifesto of appeasement from a newspaper known for its stellar coverage of Russia’s horrific invasion has disappointed many. Read the Kyiv Independent’s response the New York Times editorial board here.

Ukraine’s Military: up to 180 Russian troops killed, 19 pieces of equipment destroyed in east on May 24. Ukraine’s Operational Tactical Group “East” reported on Facebook that in its area of command Russian forces carried out three attacks on May 24. The groups says its forces destroyed a warehouse with up to 180 Russian troops inside, two tanks, five infantry combat vehicles, three armored personnel carriers, three artillery systems, three mortars, and three unmanned aerial vehicles.

Russia attacks Zaporizhzhia with four missiles, 1 killed. Several explosions were reported by eyewitnesses in Zaporizhzhia early on May 25. The air raid alert in the city went off at around 3:20 a.m. local time and explosions were reportedly heard after 5 a.m. The Zaporizhzhia regional military administration confirmed that at 5:13 a.m. Russian forces fired four missiles at the city, one of which Ukraine’s air defense managed to destroy. One person was killed, and three more were injured in the attack.

Around 200 dead found under rubble of residential building in Mariupol. Petro Andriushchenko, an advisor to the Mariupol mayor, reported that the bodies had been found in the basement of a building on Myru (Peace) Avenue.

Russian troops shell Azot chemical plant in Sievierodonetsk, killing four people. Another resident was injured in another part of the city and died from his wounds, Serhiy Haidai, the governor of Luhansk Oblast, said on May 24.

Russian military kill five civilians in Sievierodonetsk in Luhansk Oblast. Ukrainian troops managed to evacuate two civilians from the village of Bilohorivka. “The time has come when we evacuate fewer people (a day) than we lose,” said Serhiy Haidai, head of the regional military administration.

Russia’s war has killed 415 civilians in Donetsk Oblast since Feb. 24. According to Governor Pavlo Kyrylenko, 1,146 civilians have been injured in the region as of May 24. However, the figures do not include casualties in occupied Mariupol and Volnovakha.

Lithuania ready to treat wounded Ukrainian service members. Lithuanian Defense Minister Arvydas Anusauskas said on May 24 that “in the coming weeks, Lithuania will accept Ukrainian soldiers for rehabilitation,” according to a statement published on the ministry’s website. Anusauskas also said Lithuania will continue to provide training and military equipment to Ukraine.

Canada to send artillery ammunition to Ukraine. In total, the country purchased 20,000 artillery shells from the U.S., spending about $75 million for NATO-standard ammunition, Defense Minister Anita Anand said on May 24. Such 155-mm shells are used by the Ukrainian military in howitzers to fight against Russia’s invaders.

US ends key waiver on Russian debt payments. The U.S. Treasury Department said on its website it will not extend the waiver that allows Russia to make payments on its sovereign debt to U.S. bondholders, which could push Russia closer to default. The license will expire May 25.

Hungary declares state of emergency due to war in Ukraine. Pro-Kremlin Prime Minister Viktor Orban said in a video message that the war posed a threat to Hungary’s security, the financial sector and energy supplies. The state of emergency will take effect at midnight and will give Budapest “room to maneuver and the ability to react immediately.”