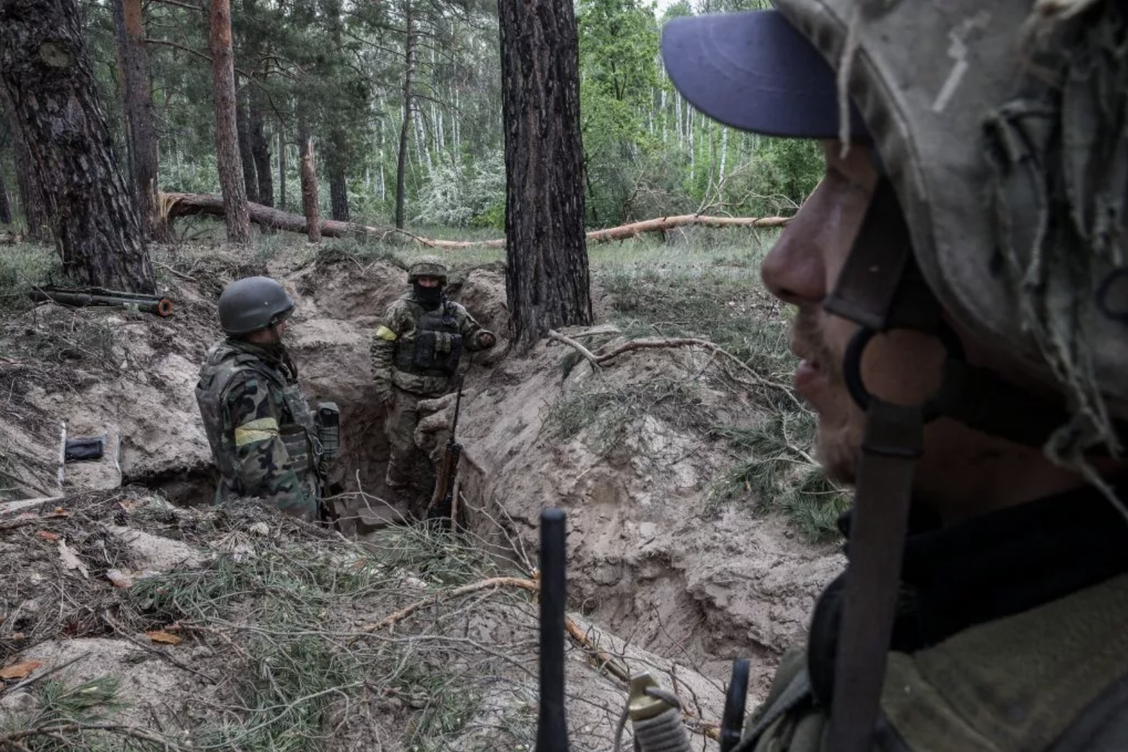 Ukrainian soldiers stationed in trenches near the city of Lyman, Donetsk Oblast on May 18, 2022. (Kostyantyn Chernichkin)

Dear readers, we are launching a new newsletter, Belarus Weekly, and you are the first to see it! To receive the Belarus Weekly newsletter in the future, subscribe via this link.

Russia says it expects Ukraine to accept its demands, including claims on occupied territories. Kremlin spokesman Dmitry Peskov said on May 26 that the Russian-occupied territories are not territorial concessions. Ukraine has repeatedly stated that it will not give up any of its territories.

Reuters: US, Ukraine discuss risk of escalation amid weapons provisions. As western partners equip Ukraine with increasingly sophisticated, longer-range weapons, the U.S. spoke of the danger of escalation should Ukraine hit Russia’s interior, reports Reuters, citing unnamed U.S. and diplomatic officials. “We have concerns about escalation and yet still do not want to put geographic limits or tie their (Ukraine’s) hands too much with the stuff we’re giving them,” a U.S. official reportedly said.

Media: Russia deletes 38,000 messages calling for protests against the war in Ukraine. Head of Roskomnadzor Andrey Lipov said that the regulator has also removed “over 117,000 fakes” about the Russia’s war and military, as well as 1,177 posts in support of Ukraine with a total audience of over 202 million users, Russian media Meduza reports.

UK Defense Ministry: Russia’s airborne forces ‘heavily involved in several notable tactical failures in Ukraine.’ These failures include the attempted advance on Kyiv via Hostomel Airfield in March, the stalled progress on the Izium axis since April, and the recent failed and costly crossings of the Siversky Donets River. The misemployment of its elite airborne forces “highlights how Putin’s significant investment in the armed forces over the last 15 years has resulted in an unbalanced overall force,” according to the latest U.K. intelligence update.

Media: Russia kidnaps men in Chechnya, forces them to fight. RFE/RL’s Kavkaz Realii, citing human rights organizations and bloggers, said some Chechen men are having to choose between fighting with Russia or facing consequences.

Belarus to establish southern military command. Belarusian dictator Alexander Lukashenko said that the separate command would control the southern border of the country, almost 1,100 kilometers. He said that Belarus needs another operational command, along with the already established western and north-western ones, because he claims the country is under threat from NATO troops stationed in Poland, Lithuania, and Latvia.

ISW: Russian forces in occupied regions of southern Ukraine preparing for long-term control. Russian forces focused on improving tactical positions and strengthening defensive lines in Ukraine’s occupied southern regions on May 26, as part of an effort to consolidate control and repel future Ukrainian counteroffensives, the Institute for the Study of War said in its latest assessment, citing Ukraine’s Operational Command “South.” Russian forces reportedly attempted to advance to the Mykolaiv-Kherson oblast borders and conducted unsuccessful assault operations around Tavriyske and Mykolaivka on May 26.

Russian media: Kremlin proxies in Donetsk, Luhansk oblasts plan to join Russia. In a comment to Russian state-controlled RIA Novosti, the leader of the Kremlin’s proxies in Donetsk Oblast, Denis Pushilin, said a so-called “referendum” to join Russia would be held in the territories if Russian forces manage to fully capture the two oblasts.

CNN: Russia has lost 1,000 tanks in Ukraine since Feb. Ukraine’s military has also destroyed over 350 artillery pieces, nearly 30 attack bombers, and more than 50 helicopters, a senior U.S. official told CNN. However, Russian forces still have military “superiority in terms of people, and equipment and weapons” over Ukraine.

Defense Intelligence: 16 helicopters provide Mariupol defenders with arms, supplies, additional soldiers. Kyrylo Budanov, chief of the Defense Ministry’s Intelligence Directorate, told The Drive media outlet that there have been seven missions during which Mi-8 helicopters have been providing Ukrainian soldiers defending the Azovstal steel plant in Mariupol with “arms, ammunition, medicine, food, and 72 additional fighters from the Azov Regiment.” Those deliveries were successful, according to Budanov. However, two helicopters were shot down during the fifth and seventh missions, and the one coming to the rescue was also destroyed, Budanov said, as reported by The Drive.

Pentagon: Russia achieves only ‘incremental progress’ in Donbas despite major numerical advantage. In an update on May 26, the U.S. Defense Department said that 110 Russian battalion tactical groups have been deployed in Ukraine, but Russian forces have only made “small gains.” Overwhelming progress by Ukrainian forces, especially near Kharkiv, have reportedly offset Russian gains.

Ukrainian football legend Andriy Shevchenko didn’t think twice when he learned that President Volodymyr Zelensky wanted him to become the first ambassador of UNITED24, a platform dedicated to collecting charitable funds in support of Ukraine. “I said yes because I knew I had to do something for my country,” Shevchenko told the Kyiv Independent. Read our story here.

Klitschko: Russian forces have killed 120 Kyiv residents, injured 300 since Feb. 24. Kyiv Mayor Vitali Klitschko said in Davos that 16 children have been hospitalized in critical condition in the Ukrainian capital since the beginning of Russia’s full-scale invasion and four of them have died.

Prosecutor General’s Office: Russia’s war has killed 240 children, injured 436. The figures are expected to be higher since they do not include child casualties in the areas where hostilities are ongoing and in the temporarily Russian-occupied regions of Ukraine.

Pentagon: US will not involve military to assist export of grains from Ukraine. Pentagon Press Secretary John Kirby said that, while Russia is weaponizing hunger by preventing the export of grain from Ukraine’s ports, the U.S. will not employ military resources to this end.

US Defense Department: Nearly 80% of howitzers US committed to Ukraine already in combat. A senior U.S. defense official said 85 of the 108 M777 howitzers the U.S. has committed over the last three military assistance packages to Ukraine are “with the Ukrainian military and providing long range fire capability,” according to a May 26 background briefing published on the State Department’s website.

Lithuania’s Foreign Minister: Suggesting Ukraine cede territories to Russia sets dangerous precedent. Gabrielius Landsbergis said that such comments from Western politicians and experts is unacceptable, in that this may serve as a green light for other potential aggressors.