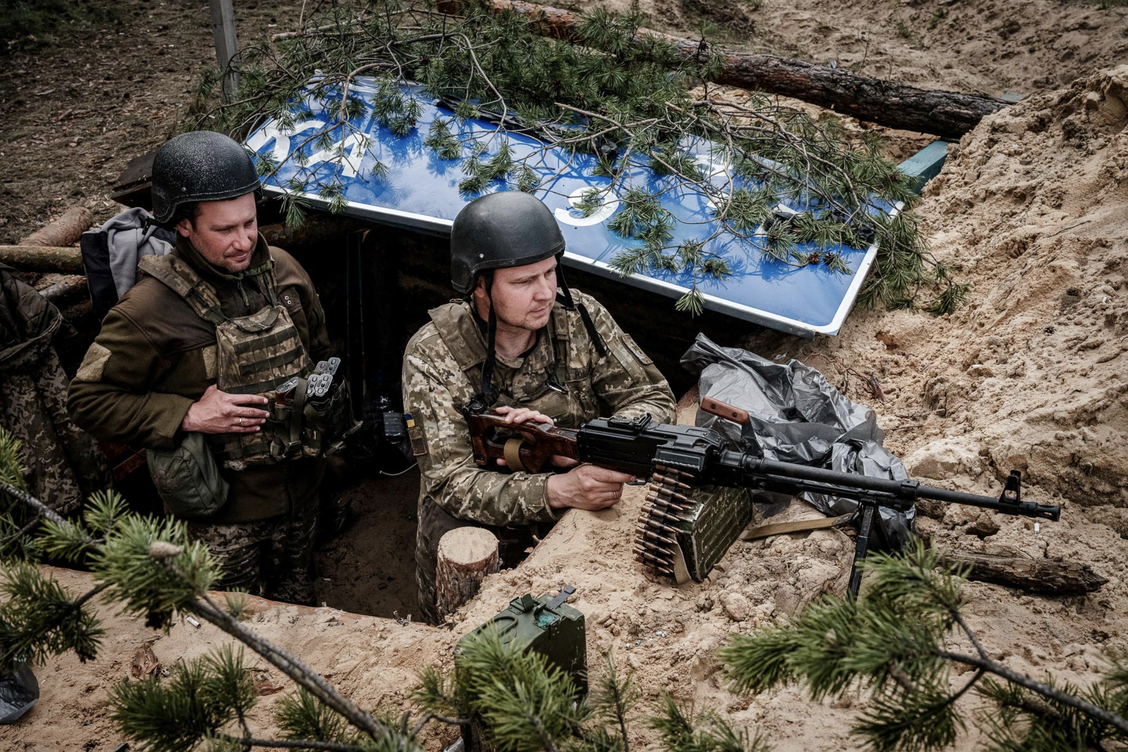 Ukrainian servicemen as seen in trenches fighting against Russian troops near Lyman, Donetsk Oblast, on April 28, 2022. (Photo by YASUYOSHI CHIBA/AFP via Getty Images)

Russian, US defense ministers speak for first time during invasion. On May 13, U.S. Defense Secretary Lloyd Austin spoke for the first time since Feb. 18 with Russian Defense Minister Sergei Shoigu to urge an immediate ceasefire in Ukraine. He stressed the importance of maintaining lines of communication, according to the Pentagon.

Fire engulfs over 1,500 hectares of forest in Kherson Oblast. The situation is becoming critical as fighting continues on the border between Mykolaiv and Dnipropetrovsk oblasts. Russian troops continue to shell neighboring regions from occupied Kherson, exacerbating the fire.

Commander: Russia launches 10-14 cruise missiles per day on Ukraine. Valerii Zaluzhny said during a phone call with U.S. General Mark Milley that Russia has been recently using X-22 supersonic anti-ship cruise missiles to target civilian infrastructure. According to Zaluzhnyi, Russia has shifted its strategy to avoid using aircraft, which has suffered heavy losses.

Ukraine’s Military: Russian offensives in Donbas unsuccessful. Russian forces have failed to launch offensives towards the villages of Oleksandrivka and Bohorodychne in Donetsk Oblast, as well as towards Zolote and Komyshuvakha in Luhansk Oblast on May 13. Russian troops also withdrew further from Kharkiv and are trying to prevent their units from being encircled near Izium. Russia continues to fire at civilian targets in Sumy Oblast and launched an airstrike at the village of Tovstodubove.

Russia deports Luhansk Oblast residents at gunpoint to occupied territory. The head of Popasna’s Military Administration, Mykola Khanatov, said that Russian forces pointed guns at residents hiding in shelters and forced them to relocate to Russian-occupied Pervomaisk and Stakhanov.

Russia launches another ground offensive on Azovstal. According to the General Staff of Ukraine’s Armed Forces, Russia continues to shell the complex, while blocking the escape of Azovstal defenders. Ukrainian soldiers continue to hold the steel plant in Mariupol, but they have repeatedly called on Ukrainian and world leaders to find a way to get them out.

Defense Minister: War enters protracted phase. Oleksii Reznikov said on May 13 that Ukraine is entering a new, long-lasting phase of Russia’s war and “extremely difficult weeks await.” Nobody can predict when a breakthrough in Ukraine’s favor will happen, he said, but it will take time for the foreign heavy weapons supplied to Ukraine to balance out against those of the Russian forces.

Institute for the Study of War: Russian forces may give up Izium axis. Russian troops may redeploy to encircle Ukrainian troops near Sievierodonetsk and Lysychansk instead. Reports of demoralization and refusals to fight among Russian units suggest that their combat preparedness continues to be low and may drop further.

Ukrainian military liberates 1,015 settlements from Russian forces. The Ukrainian military is pushing out invading forces throughout eastern and southern Ukraine, providing electricity, water supply, communications, transport, social services to the liberated areas. President Volodymyr Zelensky said in his video address published on May 13 that at least six settlements returned to Ukrainian control in the past 24 hours. “We will not leave anyone to the enemy,” he added.

Naftogaz takes over gas station network linked to Medvedchuk. The Cabinet of Ministers transferred 172 Glusco gas stations to Ukraine’s oil and gas monopoly Naftogaz on May 13. “The assets of Russia and related companies in Ukraine should pass to our state and work for the benefit of our country and all Ukrainians,” Prime Minister Denys Shmyhal said. The network is officially owned by a Greek businessman, but Ukrainian investigators say it is effectively controlled by pro-Kremlin politician Viktor Medvedchuk.

Defense Minister: Ukraine may mobilize up to 1 million personnel against Russia. Oleksiy Reznikov said on May 13 that Ukraine is boosting the defense sector to provide for potential new recruits. “We are focusing on the need to provide for one million people who will be facing the enemy,” he wrote. Reznikov also said that 1,500 Ukrainian soldiers are already training on Western weapons and may return as instructors.

CNN: Ukrainian artillery frustrates Russian offensive. Intense fighting is taking place between Izium and Sloviansk, but Russian forces have not managed to make much progress, according to a senior U.S. defense official. Most of the 89 howitzers the U.S. has given Ukraine are “in the fight,” the official said. 370 Ukrainian soldiers have completed training on how to use the howitzers.

Ukraine to import additional 350,000 tons of fuel using new logistical routes. According to Ukraine’s Economy Minister Yulia Svyrydenko on May 13, steps have been taken to speed up the delivery of additional fuel amid shortages. Entry permits for fuel trucks are no longer needed, ports on the Danube River are set to import fuel, and imported fuel will be prioritized at customs.

The Russian offensive in Donbas has bogged down, making at-best modest progress. The Kyiv Independent traveled to Kramatorsk and talked to Ukrainian soldiers who continue to hold the line. Read our story on how Ukrainian forces hold off Russians in Donetsk Oblast here.

Russian forces kill 1, injure 12 civilians in Donetsk Oblast. Donetsk Oblast Governor Pavlo Kyrylenko said on May 13 that one person was killed in Avdiivka and 12 were injured due to shelling in settlements across the region, including Illinka, Bakhmutske, and Zalizne. This does not include casualties in Mariupol and Volnovakha.

Azov officer: Russian forces lose about 6,000 troops in Mariupol. During an online session of the Kyiv Security Forum on May 13, Sviatoslav Palamar, a deputy commander of the Azov regiment, said Russian forces continued to storm the Azovstal steel plant, the last bastion of Ukrainian resistance in Mariupol. Palamar estimated that Russian forces have lost over 6,000 troops so far, including one general, in battles in Mariupol, as well as 78 tanks and about 100 armored vehicles.

CNN: EU to provide $521 million in military aid to Ukraine. EU High Representative for Foreign Affairs and Security Policy Josep Borrell announced the package on May 13. Borrell said he was optimistic about an EU embargo on Russian oil imports.

Spiegel: G7 countries may allocate up to 30 billion euros to Ukraine. The German media reported that G7 finance ministers will be meeting next week to discuss the budget for Ukraine. The financial assistance may reportedly be provided in the form of grants and loans, in an amount according to what Ukraine had earlier requested.

UK Foreign Secretary: Sanctions against Russia should only be lifted after troops leave Ukraine. Russian President Vladimir Putin must face a defeat that prevents further aggression, Liz Truss said on May 12. “Putin is humiliating himself on the world stage,” she said.

Japan to ban high-tech exports to Russia. The ban, due to start May 20, will include catalysts for oil refining, control devices for machine tools, 3D printers, and cutting edge technology such as quantum computing, slowing down Russia’s progress in this field.

El Pais: Hungary hints it needs 750 million euros to back embargo on Russian oil. Hungary’s Foreign Minister Peter Szijjarto said Hungary could not back the EU proposal to ban all imports of Russian oil without a “solution” to the costs of adapting its energy supply and infrastructure. Hungary has effectively blocked the oil embargo so far.

Pentagon: Ukraine aid bill must be passed by May 19 to avoid delays. Pentagon spokesperson John Kirby said that, if the U.S. Congress fails to pass the $40 billion bill, it might interrupt the flow of equipment to Ukraine. There is still around $100 million remaining in current presidential drawdown authority funding, Kirby said. According to Kirby, that funding has not been allocated or announced yet.